Why they are worth the effort!

Barre chords are most likely the single most intimidating technique for learner guitar players. They present a challenge in many ways: They are physically demanding due to the need to hold down five or six strings at once with the index finger, they involve learning a number of new chord shapes, they involve moving up the fretboard (which can be a big step for those used to only open chords) and they require a certain level of fretboard note knowledge to use effectively. The learning curve involved with their use has created a culture of fear surrounding them, causing students to shy away from them without giving them a reasonable attempt. Barre chords are absolutely worth the amount of effort required to become functional in their use, and this article will demonstrate why. 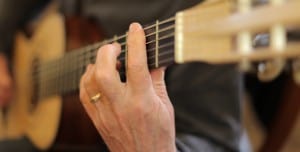 Firstly, the fact that they are difficult to learn is no reason not to learn them. Chances are learning open chords was a challenge when you first started learning to play the guitar. Playing barre chords hurts your hand at first – chances are so did playing on the guitar for the first couple of weeks. Barre chords, just like any chords when you first started playing, will hurt less and less the more you use them. As they become more comfortable physically, you will also find that the sound generated on the barred strings will improve as the tension across the fretboard becomes more consistent. Barre chords are one of the most challenging techniques on a guitar – once you can handle these, nothing else will ever appear challenging again.

It should also be noted that the biggest step you can take in making barre chords easier is checking your thumb position. You will get far better tension across the fingerboard if your thumb is in the middle of the back of the neck, pointing upwards at approximately a 90-degree angle to the neck. If your thumb is reaching over the top of the neck, then you will find it substantially harder to get even tension in your barre chords.

This is another advantage afforded by barre chords. Once the shapes are mastered, they can be applied to any root note. Whatever key you are playing in, you can play the appropriate chords for that key without worrying about finding some obscure open chord shape for it. This also means that capos are no longer strictly necessary to play songs in their original keys. Ultimate Guitar has a convenient “transpose” tool on its chord charts. Simply transpose up to the number at which the capo would have been to reveal the “real” chords, then use your barre chord knowledge to play them as barre chords, negating the need for a capo.

Play a “C” chord. Play it again. It sounds the same, doesn’t it? Having the use of barre chords will allow you a great deal of diversity in your chord voicing. You could play a C barre chord with the root on the E-string, or a C barre chord with the root on the A-string. That’s two more ways to play the same chord. Try using a different one in different songs, or using different voicings in different parts of the same song. Being able to play chords in different places opens up a whole new dimension to learning songs, and allows you to make each song your own in a new way.

Allows quick cutoffs that are necessary for certain styles of music.

One of the challenging things that you may have found with barre chords is the difficulty involved in maintaining a chord that is held for any length of time. The ability for the whole chord to cut out at once when pressure is slightly lifted from the first finger is actually one of the barre chord’s greatest strengths. A number of styles of music rely on the barre chord’s ability to be played in a short and percussive fashion (or “staccato”) to create the desired effect in the rhythm guitar. Funk, Ska, Soul and Reggae come to mind immediately, but the use of staccato barre chords can be found in Rock, Jazz, Pop, Dance, and many other styles as well. Think of when the guitar enters about ten seconds into “Uptown Funk” by Mark Ronson feat. Bruno Mars. The tight, high-pitched chords can only be achieved by playing the Dm7 and G7 chords as barre chords at the tenth fret and stopping them as soon as the chord has sounded.

To make optimal use of barre chords, you need to have some level of understanding of where your notes are on at least the 2 lowest strings. It is fine if you don’t have this already before you start learning to play barre chords – learning barre chords will help you with your note positions on those two strings. The lowest note played in any given barre chord is the root of that chord – i.e. a C barre chord will have a C as the lowest note. To play a C barre chord, you would have to find a C note on either the low E or the A string. The same goes for any other barre chord. As you learn songs that incorporate them, going to certain barre chords will become more automatic, and those notes will become better internalised. Barre chords can also be modified in much the same way as your open chords – they can have extensions, suspensions, or any other modification you can think of. Because barre chords utilise the same shape for every key, you can use your barre chord shapes to better your understanding of how these modifications work.

Barre chords are ironic in a way. While they are one of the most difficult techniques to begin with, mastering their use effectively makes all future songs easier to play. The best advice that I can give when it comes to learning them is to not let the difficulty discourage you from pushing through with them. Even if you avoid them at home, working on them on a weekly basis in the focussed environment of a guitar lesson will cause you to gradually become better at them. Don’t be intimidated by how difficult they feel initially, and don’t be swayed by other people telling you how hard they are. Like any other skill, they just require a modicum of patience and perseverance. If you have already started learning barre chords and are finding them difficult, sticking to them is absolutely worth the effort. If you haven’t started on them, feel free to discuss it with your coach – they will be more than willing to show you how they work. Above all, don’t be distressed if you find them harder than you thought they’d be. Don’t expect to be able to do them first try. Any progress you make with the technique is good progress, no matter how slow it is. If you manage your expectations properly, then you won’t be stressed out by any rough patches that you may go through with this technique. Ultimately, they lead to a more fulfilling guitar experience, and more fun for you.